Skip to content
In Part 1, I discuss and deconstruct the messaging behind a meme I found on Facebook.

It became apparent to me that many of the people who supported the meme in question were not about victim-blaming or supporting bullying behavior at all. The sentiment seemed more aligned with something like the revised meme below. 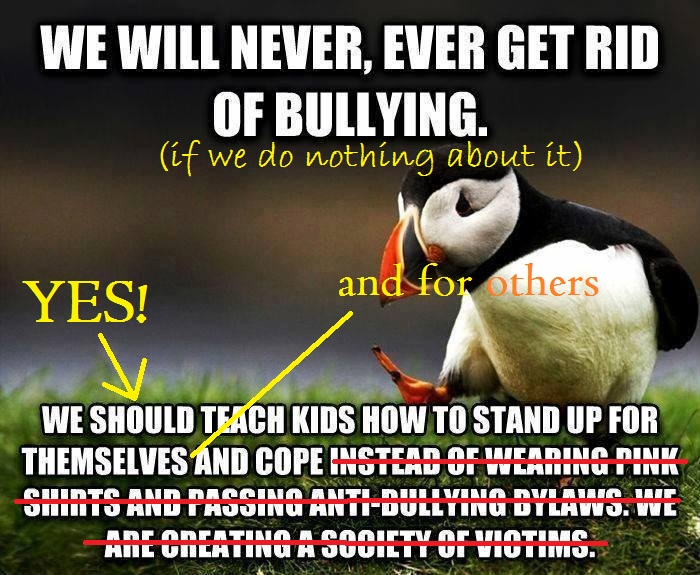 The teaching of practical skills was what appealed to people. Unfortunately, that positive message was tainted. We need a both-and approach to bullying. A multi-level (social-ecological model) approach needs to happen for bullying to be address. While we teach our children how to cope and stand up for themselves (and others), we must also teach our children NOT to be perpetrators of bullying in the first place. We need laws at the societal level that set the standard that bullying is wrong. Those laws, policies, and processes are set by communities that have a low or no tolerance for bullying behaviors. Those communities are built by people who take the time to invest in ourselves and our youth to build the positive communication skills to build healthy relationships.

The Need at the Individual and Relationship Levels
“Sad fact is that parents are not educating students at home about tolerance and or respect, which leads to more and more violence and bullying,” as my friend Kevin Roberts, owner of Arts of Defense Martial Arts in Corpus Christi, Texas points out. “We must teach students how to stand up for and protect themselves, not just have an anti-bullying week or wear a shirt once a year.” He’s very correct. Kevin went on to tell me that while he believes in the need for laws against bullying, we need to equip our kids with “real tools to de-escalate a situation,” believe in themselves, stand up for themselves, and avoid violence at all costs. Of course, students of Roberts are also taught to protect themselves if that worst-case scenario of physical violence arises.

Children who have self-confidence and good character are the ones who can, and most likely will, stand up for those who are bullied and help our victims stand up on their own.

During my conversation with Kevin, I was excited to see parents share their personal stories of their kids taught by AoD intervening as positive bystanders to stop bullying.

One parent stated about her son:

“He is a confident kid and has become a leader among his peers. He has led by example against bullying! He came home the other day and said that a kid was being bullied. His friends (girls and boys) took a stand together, and surrounded the kid being bullied to protect him while they ran to get an adult to handle the situation. I was very proud that the kids didn’t resort to violence but had the confidence to stand up for what was right. I don’t think this would have happened if those kids didn’t feel empowered!”

For evil to prevail, it requires good people to do nothing. Programs like Arts of Defense Martial Arts are needed because they provide recurring doses of messages on respect, sportsmanship, and self-confidence. That is the essence of effective primary prevention education, repeated doses and in sufficient quantity. Well, students attend class multiple times per week and receive consistent instruction on character development. I happen to know Kevin both personally and by his reputation throughout Corpus Christi. You can’t really go anywhere around here without hearing about something good about the students and instructors from AoD.

“It is the righteous man who lives for the next generation.” – Dietrich Bonhoeffer

Men like Kevin Roberts in coaching roles have a great opportunity to mentor young boys. I’ve had the honor to train and equip coaches of athletic programs in my my local area using a curriculum called “Coaching Boys into Men.” It’s a 12-week, 12-lesson program where coaches can lead 15-minute discussions with their players on topics like respect, responsibility of strength off the field, respectful language, as well as digital respect.

The program was developed by Futures Without Violence, and you can learn more about the program at CoachesCorner.org. Some of the folks I have trained have included coaches and teachers from the following:

Some of the great feedback that has come back to me has included comments like these:

Comment below: Do you have a tool, resource, or suggestion when it comes to mentoring youth? Comment below.

Episode 15 of Family Time Q&A – Preparing Our Daughter for Middle School…Already?! Husband-Wife session where we discussed whether we taught our daughter enough to build her self-confidence and resiliency to possible bullying and harassment.

Dr. Michele Borba is an expert on addressing bullying in schools by teaching resiliency and positive bystander behavior to school-age children and their parents. Check out her website, or purchase a copy of her book, Building Moral Intelligence: the Seven Essential Virtues That Teach Kids to Do the Right Thing.

Coaches Corner (an evidence-based curriculum created by Futures Without Violence) has resources where coaches of youth sports can incorporate character education in their weekly practices.

Download Strength Revisited, a free eBook download based on my TEDxCorpusChristi Talk about how we define strength in manhood.

Use Your Smartphone to Lose Weight